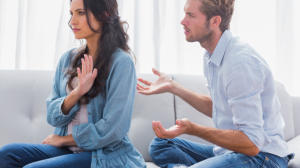 If you think giving your partner an ultimatum will solve an issue in your relationship, you’re wrong.

Ultimatums will cause more issues, before ever resolving the current ones.

There are plenty of women who believe that dishing out an ultimatum will get their man in line.

The truth is, it will likely cause him to drift further away or break apart from her entirely.

There are three hard truths about ultimatums that every woman must know before ever dishing one out.

Let’s be honest, giving out ultimatums is all about control.

If a woman feels the need to give her partner an ultimatum, it’s a clear indicator that she desires control not only over the relationship, but over her partner too.

Whatever the case may be, she’s angling to gain control over the situation and her partner by serving up an ultimatum.

Simply by making an ultimatum, a woman is showing that she doesn’t have control within the relationship.

In fact, the ultimatum will serve to place even more control in the man’s hand.

Because ultimately, he will be the one deciding whether to comply with her demands or to leave her and the relationship behind.

Ladies, healthy relationships aren’t based on who has control.

If there is an issue in your relationship, the best way to address it is through a discussion with your partner.

If he is unwilling to have that discussion with you, then it’s time for you to consider whether or not the two of you are properly aligned.

#2 – They’re Insecure, Immature or Both

Giving someone an ultimatum is a sign of insecurity, immaturity or both.

If a woman plans to use an ultimatum as a way to rope a man into a relationship, or into committing to her for a lifetime, that’s an insecure way of achieving that objective.

If a man is truly interested in being with a woman, she won’t have to make him commit to her. He will do it willingly.

If an ultimatum is something a woman is truly considering, it is likely an indicator that she doesn’t know how to express or voice her concerns to her partner in a mature way.

The first step towards resolving relationship issues, in a mature fashion, is to be open to sharing how you feel with your partner, verbally and directly.

The second step is to allow your partner to share how they feel with you, while listening to them attentively.

This way you both are respecting one another and are more likely to resolve your issues or at least determine the next step that needs to be taken.

If a woman is secure, mature and isn’t seeking to control her partner or their relationship, but feels that issuing an ultimatum is a last ditch effort to get her relationship back on track…

There is a strong possibility that she is with the wrong man.

Sometimes a woman can be doing everything in her power to make a relationship work, but the issue isn’t with her.

If a woman is not properly aligned with a man, issues are not only going to arise within the relationship, but they are going to persist.

In such cases, a woman must take time to consider all of the things she needs, desires and expects in a partner.

Then seriously assess whether or not the man she is currently with is capable and willing to meet her needs, desires and expectations.

If a woman is experiencing issues with her partner or within her relationship, there are numerous mature and constructive ways to resolve them.

An ultimatum is never the answer.

If you want to ensure that you are ready to enter into a new relationship, it’s time to dump the baggage of your past and properly position yourself to enter into your next realtionship at your best! Get your copy of the DUMP YOUR BAGGAGE Workbook right now by clicking here.